The Advantages of Dehydrated Refried Beans

Pro tip: It’s important to use a dehydrator with a temperature setting. I use and recommend both this Nesco Dehydrator as well as the Cosori Premium dehydrator that you can get on Amazon.

Before I get into how to dehydrate refried beans, I want to share some of the advantages of adding dehydrated refried beans to your prepper pantry.

The first advantage of dehydrated refried beans is that they take up less space. Especially if you want to store up a lot of food in your prepper pantry, the amount of space that various food takes matters. This is even more true for people like me who don’t have a lot of space for food storage.

The second advantage of dehydrated refried beans over canned beans is that you can make as much or as little as desired. If you’re a single person, or have a small family, you may not be able to eat an entire can of refried beans at once. If you dehydrate refried beans, you can rehydrate exactly the amount of beans you need so there is no waste.

The third advantage to dehydrated refried beans is that they are very light weight. This matters if you’re taking them backpacking, when traveling, or need to grab and go in case of emergency.

The key is to make or buy fat free refried beans. The reason for this is that it’s best to avoid fat when dehydrating food, since fat can go rancid. If you want fat, you can always add some oil after rehydrating them.

If you want to purchase your refried beans, just look for “fat free” on the label.

To make your own refried beans for dehydrating, simply cook pinto beans with spices or salsa. Spices can be as simple as taco seasoning to taste. I also like to add diced onions, roasted green chilis, and garlic powder to my beans when cooking them for refried beans.

When the beans are done, use a potato masher or immersion blender to puree them. Keep in mind that it’s fine to have some small chunks of beans intact.

Start by “plopping” the refried beans onto a tray, and then use a spoon, spread them out.

Of course, the thicker you spread them, the longer they’ll take to dehydrate, so you want to spread them relatively thin. How thin you can spread them depends on how many refried beans you made and how many fruit leather trays you have.

In my case, I have four fruit leather trays, so needed to put about 1/4 of my refried beans on each tray. I cooked just under two pounds of dried beans, and four trays were enough.

Note that if you end up with more refried beans on one tray, if you’re using a stackable dehydrator like the Nesco, put the tray with the most refried beans on top, so that it’s closest to the heat source and fan.

You can also rotate the trays to help expedite the dehydrating process.

On my food dehydrator, there aren’t any guidelines for the proper temperature for dehydrating refried beans.

I think that any temperature from 125 degrees upwards would work fine. But since refried beans are cooked and therefore there will be no additional nutrient loss as a result of dehydrating at a high temperature, I decided to go with the temperature for meat, which is 160 degrees.

I also chose this temperature since beans, like meat, are a protein.

Note that one problem with dehydrating at a higher temperature is that food can end up dehydrated on the outside, but still maintain moisture on the inside. But as you’ll see in a future step, you can break up the refried beans when they are partially dry to make sure they dehydrate all the way through.

While I can’t say exactly how long it takes to dehydrate refried beans, I can share with you how long the process of dehydrating refried beans took me.

Refried Beans after 3 Hours in the Dehydrator

Here’s how the refried beans looked after three hours in the dehydrator. You can see that they were drying and a bit cracked, but they were still very moist on the inside.

I used a spoon to break up the pieces to help it dry in the middle.

As long as I was breaking up the refried beans, I went ahead and rotated the trays as well.

The lower trays were definitely not as dry as the upper trays so it was good to rotate them.

Refried Beans after 6 Hours in the Dehydrator

A few hours later, they were almost completely dry, but there was still some moisture. By this point it was late at night and I was too tired to stay up, so I left them running over night.

When I got up the next morning, they were bone dry.

If you want your refried beans to be very smooth when you rehydrate them, you could powder the beans in a blender. But since these were smooth enough for my liking when I put them on the dehydrator trays, I decided not to bother powdering them.

Instead, I just used my hands to “powder” them as I put them into an airtight container.

One advantage of using your hands is if by chance there was still a bit of moisture in the beans, you would feel it and know that you need to dehydrate them a bit more.

How to Rehydrate Dehydrated Refried Beans

If you’re serving refried beans as a side dish, having them thinner is a good way to go. However, you won’t want thin refried beans in a burrito, unless you want them to be really messy.

So, start with 1/2 cup water to one cup of refried beans, and then gradually add in more water to get the consistency you need.

If you enjoyed this article, you will likely enjoy these articles as well: 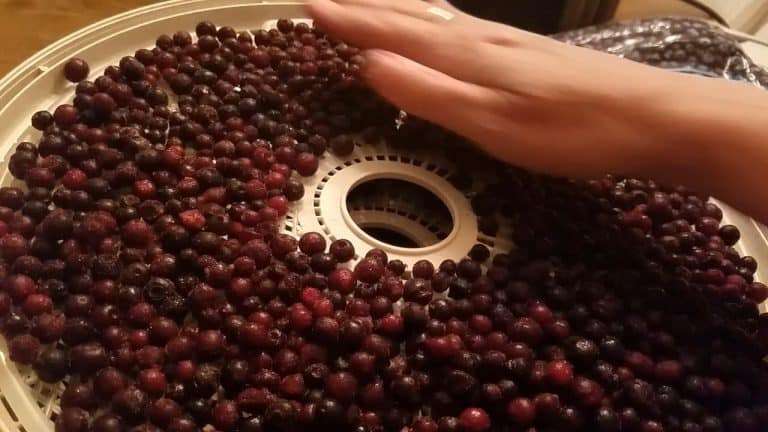 You may wonder about dehydrating frozen fruit because you need to make room in your freezer for other things. Or perhaps your local grocery store is having a sale on frozen fruit, and you’d like… 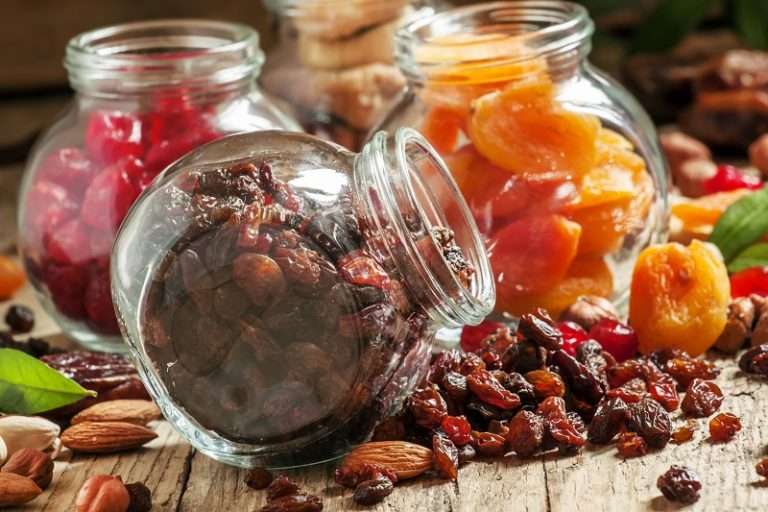 Dehydrating food offers many benefits, and it is an easy process that provides a lot of fantastic health benefits. Consuming dehydrated foods can help you cut out preservatives, chemicals, and added sugars that often come… 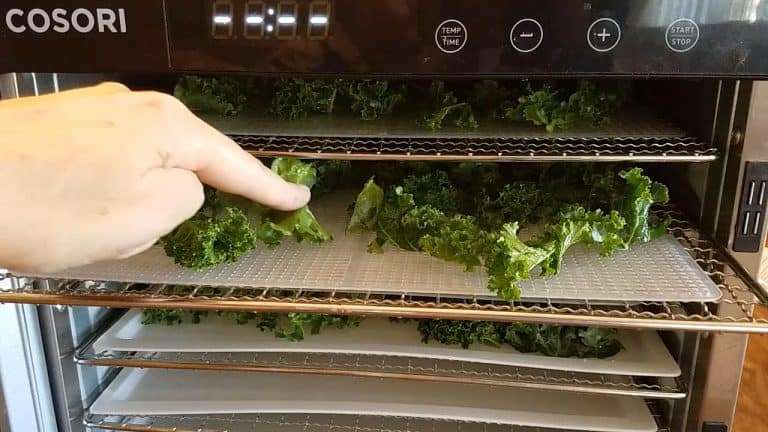 This post includes affiliate links. In this article, I show you how to make kale chips in a food dehydrator. Dehydrating kale chips is so much easier than making them in the oven. Since they… 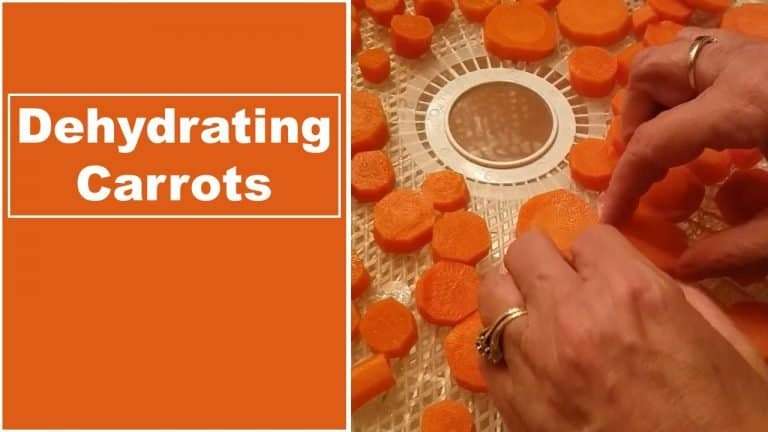 This post includes affiliate links. Carrots are one of my favorite things to dehydrate, and if you want to learn how to dehydrate carrots, you’re in the right place! In this article I show you… 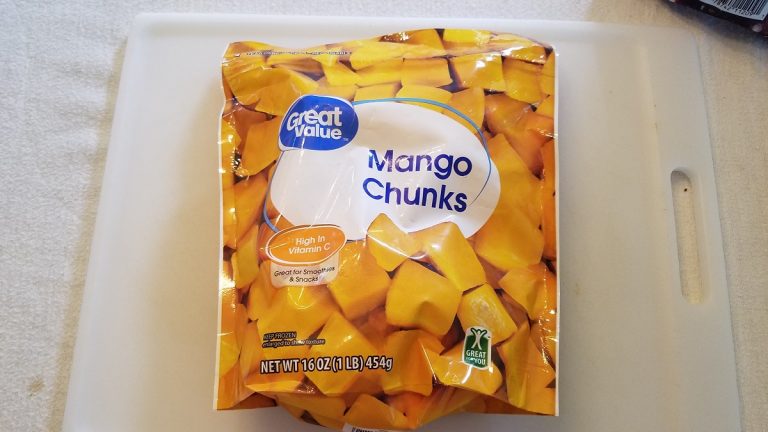 I love mangoes, but I don’t love preparing them. The large pit in mangoes makes it challenging to cut them without wasting at least some of the delicious fruit! Frozen mangoes takes care of that… 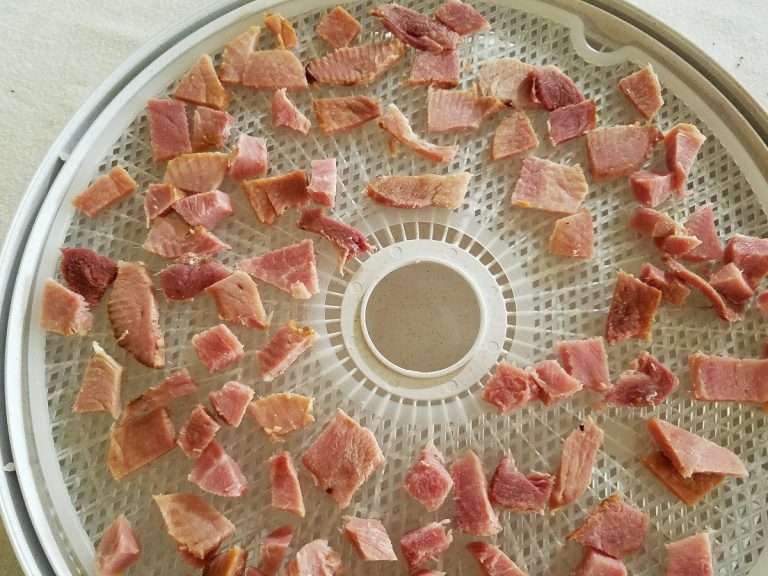 Ham is a tasty meat that is often served on holidays such as Easter and Christmas. Most often it is fully cooked, and often even spiral sliced. The biggest problem is what to do with…